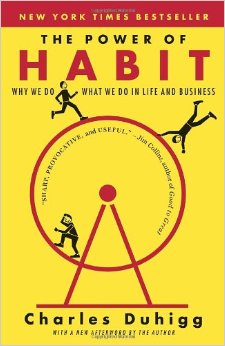 Human consciousness, that wonderful ability to reflect, ponder and choose, is our greatest evolutionary achievement. But it is possible to have too much of a good thing, and fortunately we also have the ability to operate on automatic pilot, performing complex behaviors without any conscious thought at all. One way this happens is with lots of practice. Tasks that seem impossibly complex at first, like learning how to play the guitar, speak a foreign language or operate a new DVD player, become second nature after we perform those actions many times (well, maybe not the DVD player). “If practice did not make perfect,” William James said, “nor habit economize the expense of nervous and muscular energy, he” (we, that is) “would therefore be in a sorry plight.”

But of course there is a dark side to habits, namely that we acquire bad ones, like smoking or overeating. I imagine that most people — save, perhaps, for a friend of mine who said, in reaction to a news story about the dangers of hypertension, “I’ve given up all of my vices; please don’t take away my salt!” — would love to find an easy way of breaking a bad habit or two. Charles Duhigg, an investigative reporter for The New York Times, has written an entertaining book to help us do just that, “The Power of Habit: Why We Do What We Do in Life and Business.” Duhigg has read hundredsof scientific papers and interviewed many of the scientists who wrote them, and relays interesting findings on habit formation and change from the fields of social psychology, clinical psychology and neuroscience. This is not a self­help book conveying one author’s homespun remedies, but a serious look at the science of habit formation and change.

Duhigg is optimistic about how we can put the science to use. “Once you understand that habits can change,” he concludes, “you have the freedom — and the responsibility — to remake them. Once you understand that habits can be rebuilt, the power becomes easier to grasp, and the only option left is to get to work.” He also suggests that by understanding the nature of habits we can influence group behavior, turning companies into profit makers and ensuring the success of social movements. He makes his case by presenting fascinating stories and case histories. Readers will learn how and why Target can tell which of its female customers are pregnant, even before they have told their friends and family; how Rick Warren went from a depressed minister of a small congregation to the leader of one of the biggest megachurches in the world; why Rosa Parks’s refusal to give up her seat started a movement when similar refusals by others had not; and why a 1987 fire in a London Underground station failed to be contained, leading to the deaths of 31 people. Unfortunately, it’s not always clear from Duhigg’s book how we should boil down these examples into a prescription for change, because he combines markedly different behaviors, at the individual and societal levels, into the rubric of habits. In the first chapter he presents a simple scheme called “the habit loop,” whereby an environmental cue automatically leads to a behavioral routine that results in a reward. He sticks to this scheme throughout, using it as a framework to understand such diverse behaviors as why people buy a certain brand of toothpaste, become addicted to cigarettes and alcohol, and prefer particular songs on the radio. The danger of trying to explain so much with one framework is that it sidesteps crucial distinctions about why people behave “mindlessly,” distinctions we need to understand if we want to change those behaviors.

One way behavior can become habitual, as noted, is through repetition. If we acquire a bad habit this way it is very hard to change, because its grooves are so well worn in our minds. We have to painstakingly practice a better response that wears a new groove. Duhigg gives the example of the success of the former N.F.L. coach Tony Dungy, who, with lots and lots of practice, taught his players a small number of important moves they could perform without thinking, even at the most crucial point in a game. Bad habits are overcome by learning new routines and practicing them over and over again. But then there are compulsions and addictions, behaviors that involve dependence on a chemical substance, like nicotine or alcohol, or behaviors that have become so rewarding that they’re nearly impossible to resist (e.g., gambling). As many wrecked families can attest, these habits are the hardest to change. Unfortunately there is no magic bullet, though intensive treatments and social support can work. Other behaviors are habitual because they obey social norms — norms that we rarely question or think about. We shake hands when we greet people, wear socks of the same color and eat with a fork because these are the customs we have learned. Such behaviors are not well­worn grooves in our minds, but actions we could easily alter if the laws or customs that governed them should change. In the not­so­distant past, for example, Americans habitually failed to wear their seat belts — in 1984, 86 percent failed to buckle up. By 2010 this “habit” had flipped, such that 85 percent of people now wore seat belts. This change did not involve learning a new routine, as happens when people spend hundreds of hours learning a musical instrument. After all, people already knew how to grab the belt and insert the buckle into the receptacle. Rather, it happened because of changing norms in our society (spurred on by legislation in some states). In fact, social psychologists have shown that an effective way of changing many habitual behaviors is to change people’s perceptions of the norms that govern them, resulting in reduced drinking on college campuses, for instance, and lowered energy use in the home.

There is another type of habitual behavior that involves more cognitive activity, namely people’s interpretation of a situation according to what it means for them and how it fits into the narratives they tell themselves. These behaviors are habitual in the sense that people have chronic ways of interpreting the world. A black college student’s “story,” for example, may be that she doesn’t belong at the majority­white university she attends, which causes her to fall into a pattern of disengagement and academic failure. Research shows that changing black students’ stories about their sense of belonging improves their academic performance and health throughout college. The point is that habitual behaviors come in many different forms, and squeezing them into one framework misses some of the nuances of how to change behavior effectively. In recent years social psychologists have developed many effective interventions to help people improve their lives, only some of which involve breaking bad habits in the way Duhigg describes. Nonetheless, “The Power of Habit” is an enjoyable book, and readers will find useful advice about how to change at least some of their bad habits — even if they want to keep their salt.

THE POWER OF HABIT Why We Do What We Do in Life and Business By Charles Duhigg Illustrated. 371 pp. Random House

via ‘The Power of Habit,’ by Charles Duhigg – The New York Times.