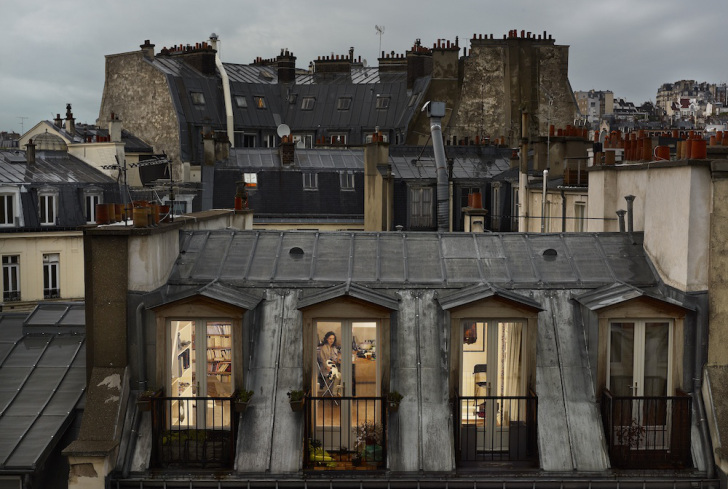 Dreams, nightmares, and insomnia are responsible for more art and writing than we could possibly count. Photographer Gail Albert-Halaban spent sleepless nights peering through her window, looking for signs of life in the darkness of Paris’ city streets. Those closest to her, her neighbors, appeared in their windows and helped the artist break her solitude. One look inside their personal spaces captured her imagination. With camera in hand, the strangers who lived around her became the subjects of her new series, Paris Views. The photos will be on display at the Kopeikin Gallery in Los Angeles opening September 12 through October 17.

“These projects invite the viewer to see inside and outside at the same time. The glass panes of a window somehow become even more transparent with the blending of two worlds,” reads an exhibition essay. “The outside world whizzes by, as the inside seems immune to the passage of time. Loneliness is examined simultaneously through multiple windows — a man sits in solitude on his bed, a woman alone at her desk, a child practices her wind instrument solo — leading to a sense of relation among them all.”

via A Photographer’s Voyeuristic Photos of a Paris Neighborhood Captured During Sleepless Nights | Flavorwire.