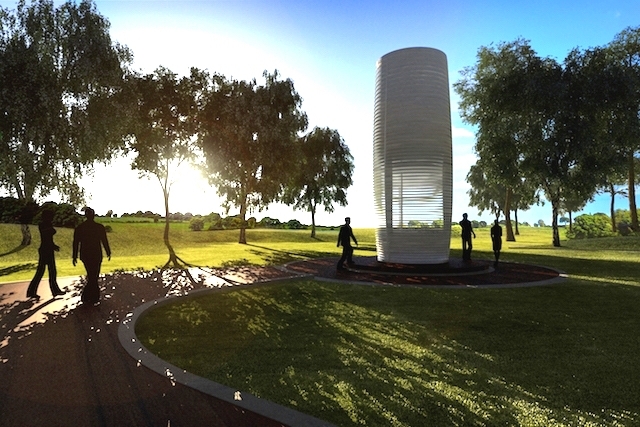 Imagine if you could use a vacuum cleaner to suck up all the air pollution in a city—and then turn it into jewelry. That is, in short, the plan for the Smog Free Tower, a new project by glow-in-the-dark smart highway and LED aurora borealis-makers,  Studio Roosegaarde. To help build the air-purifying tower in Rotterdam, the project went live on Kickstarter last week. Backers can purchase a Smog Free Ring and donate 1,000 cubic meters (35,314 cubic feet) of clean air to the city. The new tower is set to begin construction as soon as next month.The structure is, in essence, a 23-foot-tall modular system which uses patented ion technology to filter the surrounding air. “We’re basically building the largest air purifier in the world,” Roosegaarde tells The Creators Project. “The technology is already used indoors in hospitals. It’s safe and tested, we just build the largest one outdoors. Here, people can once again experience what it is to breathe clean air, for free.” The smog-free park is meant to convince city boards, NGOs and the industry at large of the fact that there are solutions to smog that are both practical and scalable.

The plan is to compress the collected smog particles and into high-end jewelry. “Each Smog Free Ring supports the cleaning of 1,000m3 of polluted air,” says Roosegaarde. “For the men, we’re designing Smog Free Cufflinks.” It may be a jewel made of pollution, but it’s one that’s pure at heart.

If the crowdfunding campaign succeeds, construction of the Smog Free Tower will begin as early as September 4, 2015. Possible future locations include high-pollution cities such as Los Angeles, Beijing, Paris and Mexico City. “The Smog Free Park is not intended as a final solution, but as a tangible solution of what a clean future could look like. It’s time to make people become part of the solution instead of the problem.”

via The “World’s First” Smog-Eating Tower Breaks Ground in Rotterdam | The Creators Project.