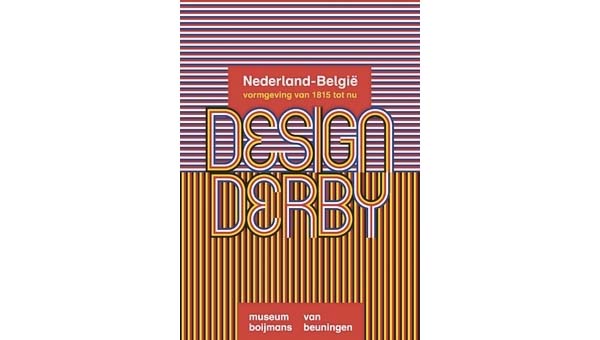 In this ‘design derby’ the design icons of the Netherlands and Belgium will face each other in an exciting confrontation. From the sumptuous and elegant Belgian Art Nouveau to the more austere Dutch version and from the contemporary traditional tours de force from Belgium to the level-headed Dutch Design of today. Who will be the winner of this match or will it end in a draw?

In the summer of 2015, Museum Boijmans Van Beuningen will be staging a retrospective of Dutch and Belgian design over the past 200 years. Five hundred objects will be on show from the two neighbouring countries, varying from silver, glass, ceramics and posters to furniture, fashion and cars. The objects will be presented next to each other, in chronological order. At each moment of the time-line from 1815 to 2015, the visitor can see the most interesting items from the Netherlands and what Belgium, in turn, considered as exemplary at this juncture. After Rotterdam, the exhibition will, in the autumn of 2015, travel to the Design Museum in Ghent. Berlage “Van de Velde Belgian design is seen as craftsman-like, aesthetic, with the occasional surrealistic detail. For Dutch design, descriptions frequently mentioned include simple, sober and conceptual. How have the Netherlands and Belgium related to each other during the past 200 years in the field of design? What differences, for example, can be seen in the decorative and utility objects from the start of the 19th century, when the Industrial Revolution in Belgium propelled the country forward, while this development would not take place in the Netherlands until 50 years later? And what did both countries use to compete with each other during international challenges such as the Art Deco exhibition in 1925? But similarities emerge just as frequently as differences, when the two neighbouring countries shared the same inspiration or when an unmistakeable exchange took place. Where names such as Berlage, the Bruynzeel kitchen and Philips set the tone in Dutch design history, these positions in Belgium were assumed by Henry Van de Velde, the Cubex kitchen and the household products of Nova and Kalorik.

The comparison between the Netherlands and Belgium offers insight into the design history of these two neighbours, and at the same time allows people to look more closely at the development of design in their own country.Family GameIn the exhibition families can play an exciting match this summer. Travel 200 years back in time and compare objects from the neighboring Netherlands and Belgium. By answering questions and making assignments you can put together your own ‘dream team ‘. Collect all game tickets in the special booklet and determine who is the winner of this friendly competition: the Belgians or the Dutch. The booklet may be collected as a trophy to take home.PublicationA book will appear with the exhibition, in which eight historical and theoretical themes, with examples of objects that will also be on show in the exhibition, will be discussed in depth by Belgian and Dutch authors. Each article will be accompanied by comments from a specialist from the neighbouring country.

MoreWatch on ARTtube.nl the video especially made for ‘Design Derby’ with curators of the exhibition.Acknowledgements‘Design Derby: Netherlands – Belgium (1815-2015)’ is being made possible in part by Bankgiro Loterij, Fonds 21, Mondriaan Fund, Prins Bernhard Cultuurfonds, Beste Buren and Boijmans Business Club and is being staged as part of the celebration of the bicentenary of the United Kingdom of the Netherlands. When it closes in Rotterdam the exhibition will travel to Ghent (23 October 2015 to 14 February 2016).